In this article, we will explain the communication and manipulation methods used during the World War II, specifically the principles of the Nazi Propaganda created by Joseph Goebbels.

A curious fact, even though these principles were used during the World War II by the Nazi regime (leadered by Adolf Hitler) they still apply to the digital word.

The Nazis not only had strong military power, they also had a huge control over the media by using the 11 principles of the Nazi Propaganda written by Joseph Goebbels.

These principles are still being used and can be applied to the new media with the help of the new technologies.

In this article we will give you a guide based on Josep Goebbels’ 11 principles of the Nazi propaganda, used in the Alemania Nazi, that you can apply in your communication strategy to succeed and have success in the web 2.0 for your product, event, personal brand or any company.

Even these principles apply to the diffusion of the idea through propaganda, now at day they can be applied also to advertisement and business.

But it is important that you know that this tactics or strategies are not always “ethically correct”, depending on your believing. But, anyway is good to know them for you to be able to identify when they are being used in us.

Now, is time to start with a little bit of history.

¿Who was this important character in the success of Adolf Hitler? 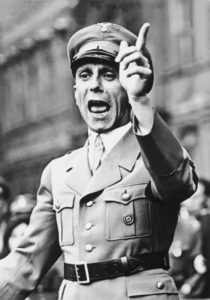 Better known as the father of the propaganda Nazi, Goebbels was the minister of propaganda during the government of Hitler.  He had under his power the media. Besides, he was a theoretical and created a list of the 11 principles of the  Nazi propaganda.

Here, we are going to explain you these principles and how you can adapt them to the marketing online and have success.

1.- Principle of simplification and a unique enemy

For this point, you will have to create a unique idea, a unique symbol. Reunite a single concept that differences you of your enemies.

It is very important, that your brand will have a unique concept. We know that you can have a lot of ideas and is not bad but for digital marketing, you have to unite in only one general idea that represent what you want to sell or create.

Unique your ideas, they all need to have the same concept; this is functional to passionate your brand in the web. This way, the user can easily identify it in any platform.

The people that want to do a lot ends doing nothing.

This principle, applied to the web, means that in order to be successful in Digital Marketing, we must have well-defined objectives and fight hard against the values ​​opposed to those that your brand represents.

To do this you can investigate and study the competition and what is explained in the principles of Nazi propaganda by J. Goebbels. It is about knowing what their weaknesses are, their advantages and disadvantages.

Collect them all as a single adversary and create a plan for how you can compensate for these weaknesses with your proposal. Once you have identified the enemies, give them a unique name that encompasses them all.

3.- The transposition, another of the principles of the Nazi propaganda of J. Goebbels

This principle consists in charging the adversaries with errors, defects and faults of their own. Of the eleven principles this is the least ethical. It is the most used by politicians.

“If you can not deny the bad news, invent others that distract you.”
In short, blame someone else.

Although we are in the 21st century, the media exercise much control over “the truth”, great battles are still fought to dominate the audience and define who is right, manipulate facts, tell lies and debate between what is truth and what is false.

Currently, in 2017 there are many “fake news” on Facebook, fake WhatsApp audios, edited videos and “photoshoped” images. There are experts in creating global trends and manipulating public opinion. If you know how to handle it, you can get it right in any situation, even if everything is based on a lie.

4.- Principle of exaggeration and disfigurement.

Also known as the principle of insecurity. It is about using any anecdote, detail and turning it into a threat. By creating terror in people, it is easier to master it.

This principle is very easy to translate to online advertising. It is enough to exaggerate a little to cause fear in the public and thus people are practically forced to acquire your product or service because of a strong emotional need.

After causing fear, surprise, intrigue or other strong emotions you offer your solution to all the problems they may have in the future if they do not acquire your product.

In addition, it is one of the most used within the principles of the Nazi propaganda of Joseph Goebbels.

The objective of this principle, carried out by J. Goebbels, is that of easy understanding. Everything must be clear and simple. “All propaganda must be popular, adapting its level to the least intelligent of the individuals to whom it is directed …”.

When talking about digital marketing, using simple language is vital if you want to be successful. Very complicated things are simply ignored. People do not need to take more time than necessary to understand any announcement, because they need answers and not questions.

Imagine a person tired of work, routine, day to day, and when you get home check your cell phone, but instead of relaxing, you will find your publications extremely complicated and difficult to understand; he will simply ignore them and you do not want that.

The message should be repeated as much as possible. Hence also the famous phrase: “If a lie is repeated enough, it ends up becoming true”.

If we apply this principle to the world of Online Marketing we must: repeat, repeat and repeat the same concept in different ways and with different angles so that it has a greater scope. Do not forget that the firmer the idea and the repeat, the greater the impact.

Currently, social networks are the echo of the news, knowing everything about its operation will be helpful to obtain a greater scope.

Bombardment of information and images, which prevents the person from reasoning. New information and arguments must be constantly issued at such a rate that when the opponent responds, the audience is already interested in something else.

Advertising on the Internet is mostly about captivating the audience. The challenge is how to maintain the interest of people over the years.

We must maintain a process of constant innovation by providing new content. It can not be stopped EVER. And less in an environment as ephemeral as Web 2.0, if the brand is silent the public will be interested in something else.

, because social media requires a constant presence every day.

In addition, the new messages must be consistent with the old messages (so that they work with the repetition principle mentioned above)

8.- Principle of the likelihood.

The principle is also related to the previous one. It consists of constructing arguments from different sources, through the so-called probes balloons or fragmentary information. “There are no facts, there are interpretations.”

What this means is that if different sources talk about the same subject, the information gains a lot of weight.

Likelihood means that something “seems” true. While truthfulness is when something is simply true.

Translating these principles of the Nazi propaganda of J. Goebbels, we can say that there are many resources that you can use to give weight and “verisimilitude” to your message. Just enough that your message is in many sources, various media, different platforms and commented by several authors from different angles.

An excellent tactic that you can use to get the attention of the user: Influencers and blogs. If your product or service is recommended by different authors and celebrities (and not so famous) the message has much more weight and becomes “credible”; that is, it seems true because many say it.

9.- Silencing: Another of the Principles of Nazi propaganda by J. Goebbels
Bad news must be silenced. They should make as little noise as possible, and keep them from transcending.

Nowadays it is almost impossible to prevent bad news or a threat from being published. For this, you must use other news; distract the audience so that they do not find out, in a more extreme case, that they forget the bad things they just saw.

There are specialists in crisis management in social networks and the internet. But this is such a complex issue that you should dedicate your own input.

Another of the Principles of Nazi propaganda by J. Goebbels consists of transfusion, it is merely exploiting through the propaganda message the beliefs, myths, feelings, hatreds and cultural and traditional prejudices of the audience that is intended to be manipulated.

In advertisements where adolescents are to be manipulated, their rejection of parents, teachers or bullys is exploited.
Within the political propaganda that seeks to influence the poor, their displeasure is exploited by the bosses and the rich, putting them as evil misers.
Many advertisements in which you want to manipulate women are confronted with other women, such as: the mother-in-law or hypocritical friends.
If you want to convince a rocker, the bad guy will be a reggaeton player, whaleman or bachatero.
Many advertisements also exploit racial complexes or xenophobes.
If you want to manipulate the people of the upper class, the enemy will obviously be the bad taste, ordinary, badly educated and ugly people of the lower class.
Almost always propaganda operates based on a preexisting substratum; it is about spreading arguments that can take root in primitive attitudes.

Even when we live in hyperconnectivity thanks to technological advances. And despite that we are supposed to have overcome machismo, racism, xenophobia, classism and sexism. Complexities and prejudices continue to move the decisions of the masses invisibly.

Many of these messages are transmitted imperceptibly disguised as jokes, memes and viral videos. Many times brands or politicians secretly influence the creation of these contents and distribute them virally through the web through unofficial means to influence public opinion.

11.- Unanimity, the last of the principles of Nazi propaganda by J. Goebbels

Get to convince many people who think “like everyone else”, creating impression of unanimity.

This principle is also closely related to the previous one. It means that we must appeal to common sense, to general culture, to popular wisdom, to the attitudes and beliefs that most people are supposed to have.

On the Internet, as well as in any media, generalizations allow people to identify easily. By using phrases that give the impression of “thinking like most” a lot of interaction and fidelity is achieved.

Here are some examples of phrases that you have probably seen in the most popular Internet publications:
I’m 99% of that …
We all have a friend who …
It has happened to all of us that …
Everyone knows that …
Typical that …
If I do not pass this you did not have childhood …
If this happened to you, you are not … (man, woman, or of a certain nationality or of a certain group).
Also, traditional popular phrases and sayings are considered reliable and wise. Although many times they are terrible

This site uses Akismet to reduce spam. Learn how your comment data is processed.